As part of outreach, our childline counselor found a case related to child sexual abusement in newspaper. To know the complete details, she went to the location along with the BRB coordinator, DCPO, Childline coordinator. Actually, this case happened in a school. The incident was about a girl named N.Swapna who is studying 9th standard, Z.P.H.S School, Kotthuru of Dharmaram mandal. The science teacher of that school named Mozaruddin, called this girl to discuss the experiments for a science fair .But instead of experiments, he displayed her porn videos and also told her that he will give more marks if she doesn’t reveal, and also threatened her not to reveal this to anyone. But the girl with good courage, informed her parents about this incident. Immediately her parents came along with the village people to the school and beat the teacher brutally. The childline team had a conversation with the headmaster, staff and the other children about the science teacher’s behavior. We have supported the child emotionally and motivated her to maintain this courage all the time. In return, we took a report from the child about the incident in her own words. This letter was submitted to the collector through DWO sir. As per the report, strict action was taken against the teacher and got suspended. Now the child is in a good condition and going to school regularly and continuing her studies.

We received a call from CCC regarding Physical Abuse, a boy named K. Shekar of age 13 years lives with his mother, a resident of dharmaram. He was repeatedly beaten by the owners of her mother’s house where she works and not sending him to the school. After getting the information, a childline counselor along with ICPS with the support of local police went to the location. We received the call about this case a few months ago, at that time we had produced the child before CWC, gave counseling and handover to the mother. Now the police also gave counseling to the child’s mother and her owners. Again we have produced the child before CWC through online and as per the CWC instructions. The boy was given accommodation in “Amma Pariwar”.

We received a call from CCC regarding shelter and education for two boys whose parents expired one year back, from then they were living with their uncle’s family. From the beginning of Covid-19, both of them were not attending the school. Our team went to the location and took the details of both the children. They were produced before CWC and kept in “Ananda Nilayam” for temporary shelter .Our team ensured the permanent shelter in CCI and education for both the children.

This case was identified in Outreach. Looking into the details, a girl lost her father 3 years back due to health issues. One year back, during the time of Bathukamma festival at her grandparent’s home, the girl’s mother and her sister went to a nearby canal for washing clothes. At that time, her sister was about to fall in the canal, in order to save her both mother and her sister got drowned in water and succumbed to death. From then, she was living with her grandparents, whose health was not good. They are not in a good position to take care of that girl. The childline team went to the location and came to know about all these details and gave her emotional support and provisions. To provide her with quality education, our team decided to join her in “Bala Sadanam” from the next academic year. Currently she is going to a local government school and continuing her studies.

This case was identified from local newspaper which was published in Praja Prashna on 13.03.2022 as “Bangaru Telangana lo Adukku Thine Valla Brathukulu Marava”.Total of 3 children were found begging at Venkatapur village of Yellareddypet mandal. In Response to the News Article we went to Venkatapur village along with ICPS department and conducted enquiry .In news article it was mentioned 3 children were begging and after conducting enquiry we also identified another 4 dropout children in that village .We met Children and their parents, took the details .Later we have produced all the children along with their parents in front of CWC and gave counseling that child begging is against law and should not be practiced. As per the CWC instructions, the childline team has joined 2 children in KGBV Residential schools, 2 children in Anganwadi School, Another 3 children in MPPS School. We took a letter from the parents mentioning not to repeat this again. Now the children’s condition is good, they are not begging and regularly going to school.

We received this case from Outreach Rajarajeshwara temple of Vemulawada mandal. The child went missing from his parents in Rajarajeshwara temple so temple staff made an announcement. But still the parents were not identified, so temple duty police informed the child line. Child line team informed the line departments and went to Rajarajeshwara temple along with the ICPS department. We rescued the child and took the details .Then after, as per the CWC instructions we went to the police station and filed a complaint in Vemulawada. We produced the missing child before CWC and they gave counseling to the child and provided temporary shelter in the Urban Residential School at Chandrampet. Next day we identified the child’s parents and produced them before CWC. The CWC has given counseling to the child’s parents and handed over the child to the parents. Finally, we took a letter from the child’s parents not to repeat this kind of mistake again.

Yoga is a physical activity which is practiced by so many great people , which is one of the major reasons for them to be focused and dedicated in their busy schedules. Yoga helps them to stay healthy physically and mentally. It is taught to students in all our adopted schools in a regular session. PET sir visits the school and teaches students about different asanas to make them practice for multiple times ,so that it becomes easier.There are huge benefits of yoga ,especially for children.At a very young age, if they were given the knowledge about this and practiced regularly will give children amazing results.

Here are few more asanas that are daily practiced by our students . They are

So similarly, each activity has its own importance and benefits in many ways. Teaching this activity to students will mold them into good citizens. 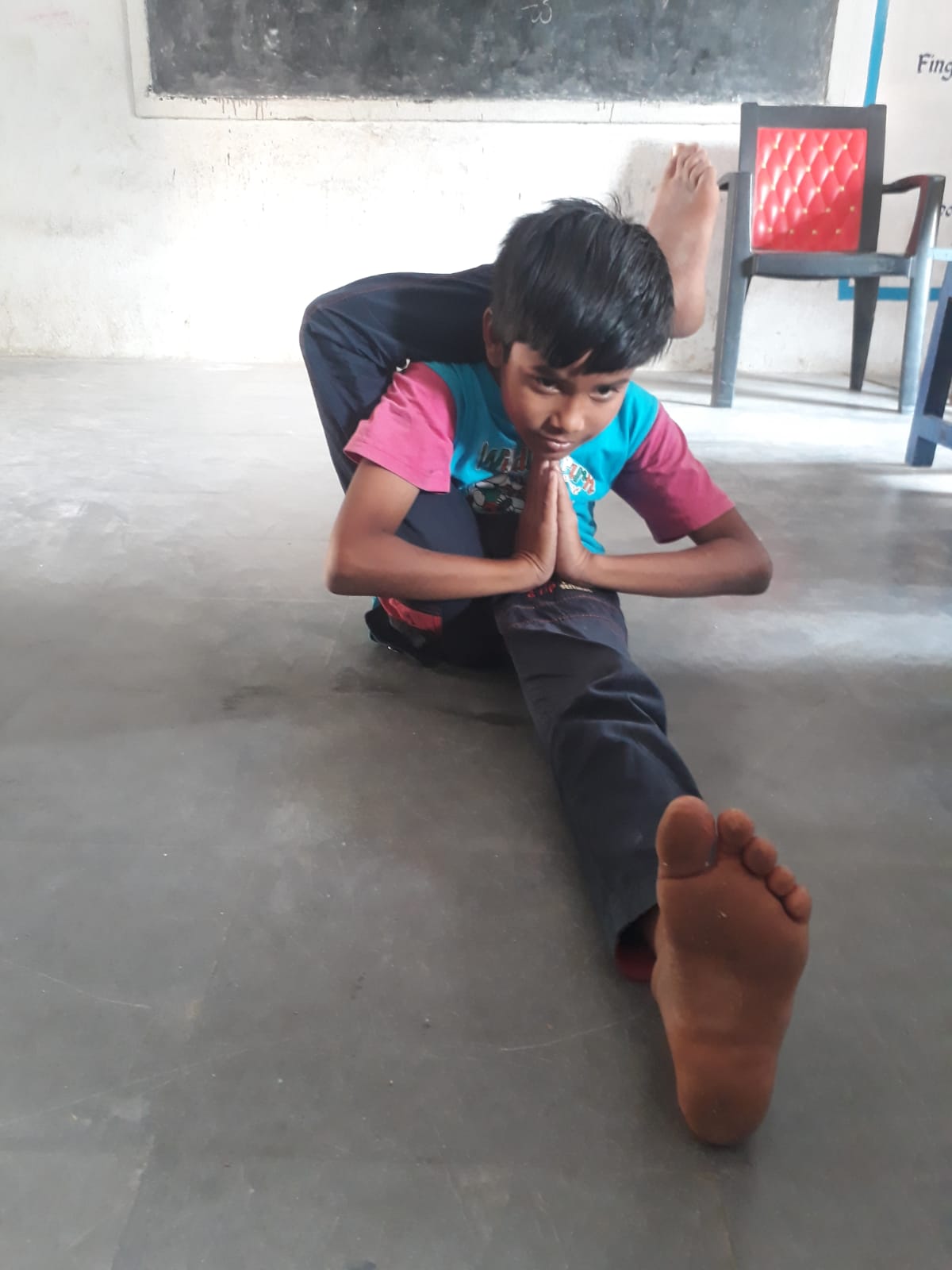 Drawing is a skill, which brings out the thoughts of students. Every time the topic will not be the same, for every different topic students were drawing amazing pictures. Drawing is practiced by students in all our adopted schools. For example, on the festival of ugadi, few students have drawn about the festival vibes, whereas other students have drawn the special dish served in a bowl. We have provided them books with pictures, students do coloring for those .On the occasion of special days, Students do drawings related to that special day, till now, they have drawn pictures on the theme of holi, ugadi, freedom fighters and houses, birds, animals etc .Every student is unique, one draw a picture very normally showing the basic gadgets used on that day. Some children’s drawings were regular activities like students going to school, playing with friends and playing with pets etc. Students, who have an incredible talent in drawing, can continue this as a career like an artist. Students also practice elocution on freedom fighters and festivals daily, in which also students draw the portraits of famous personalities. 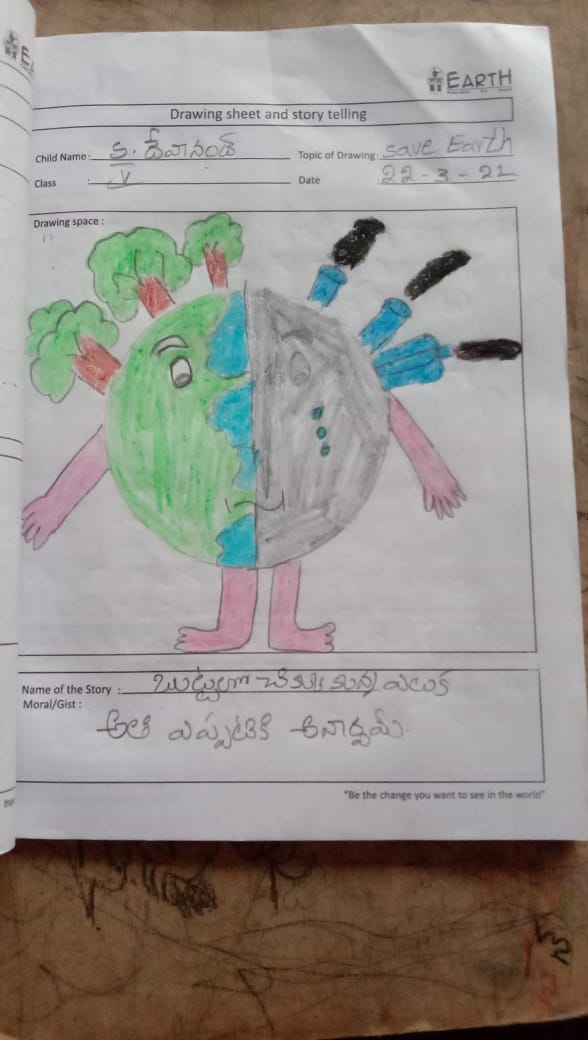 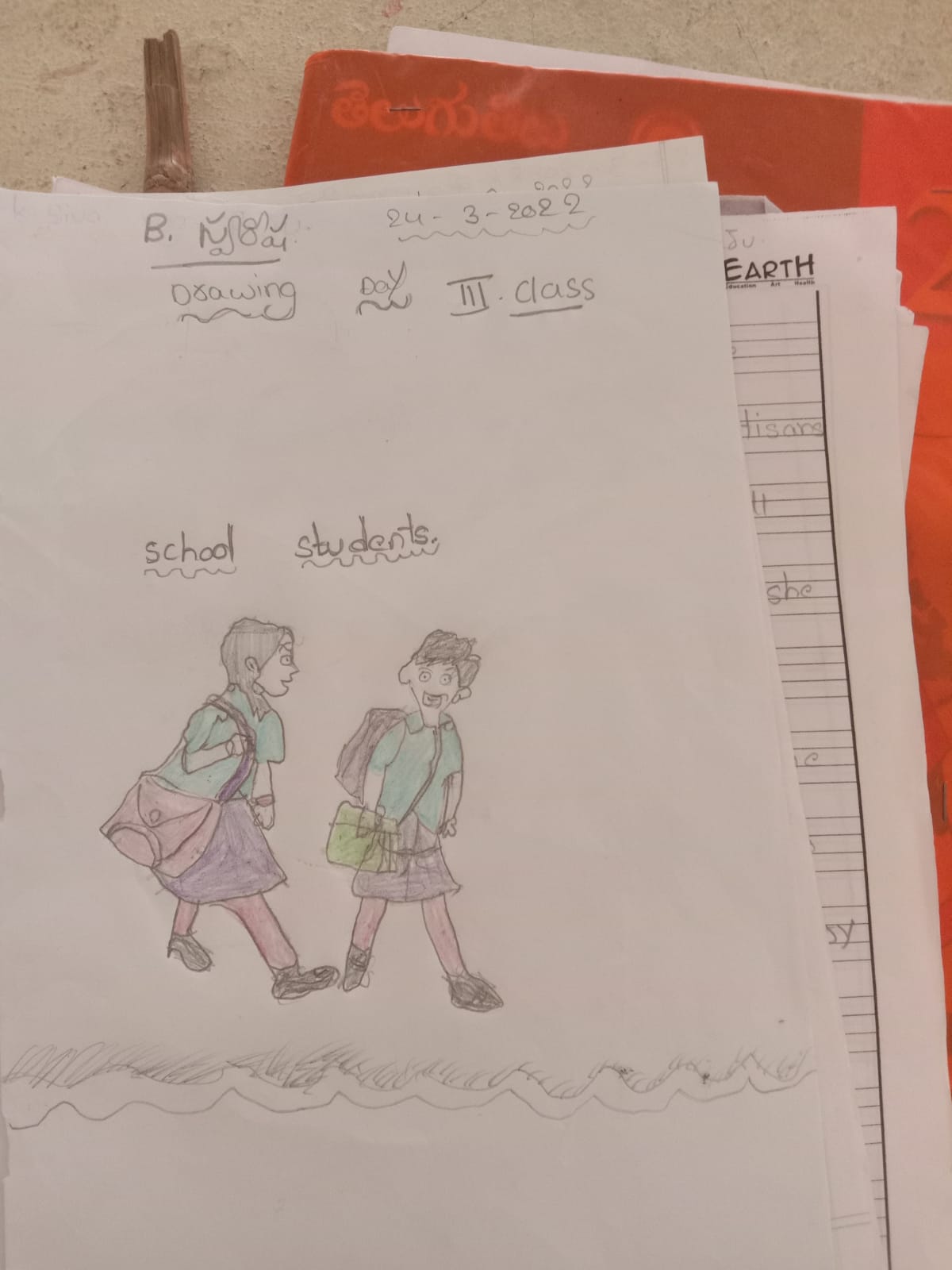 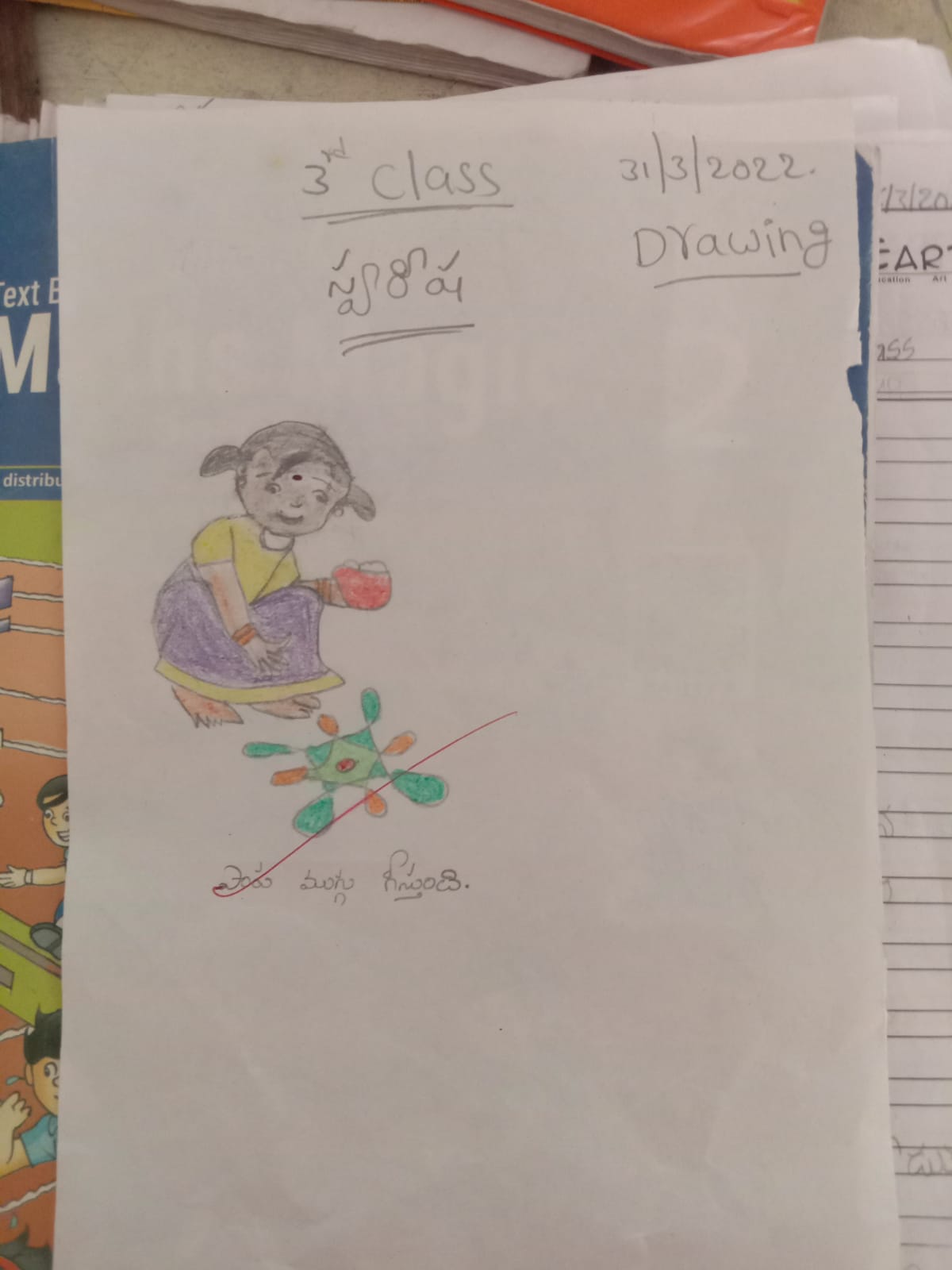 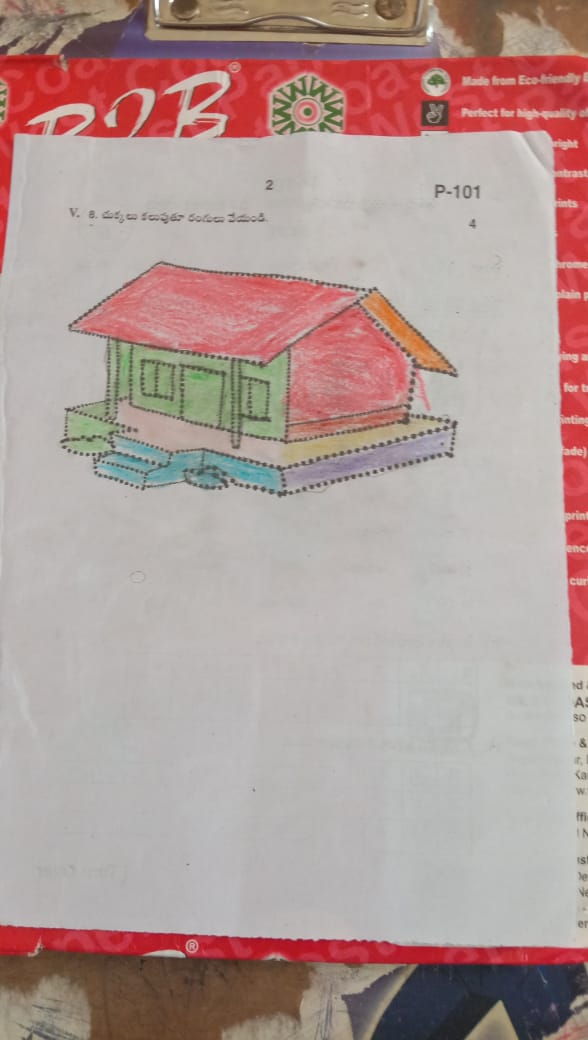 Along with these, students are also learning activities like march past, karate, elocution, flexibility exercises which are the base for yoga, pyramid formations and dance and also indoor games chess and carrom board. 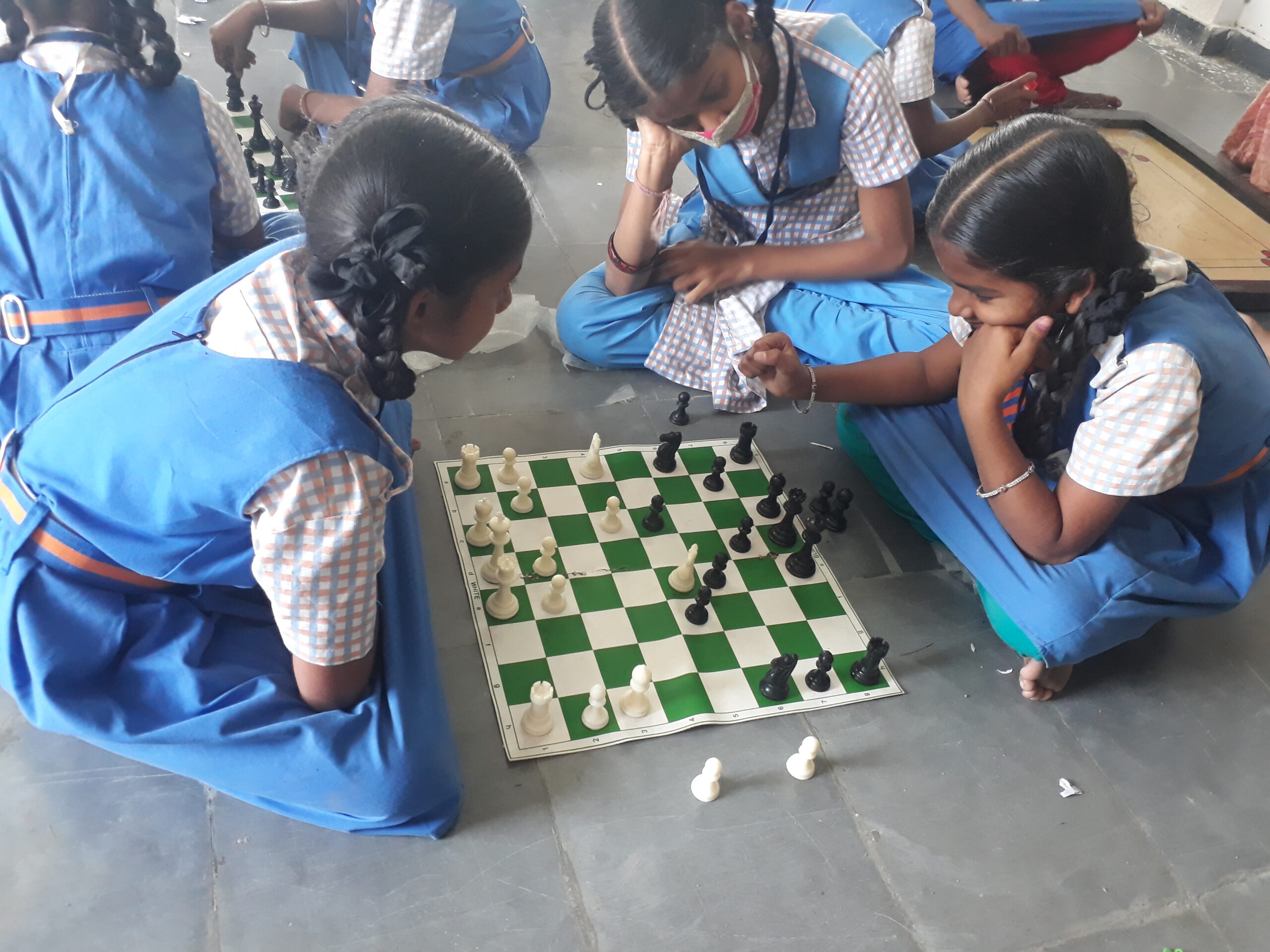 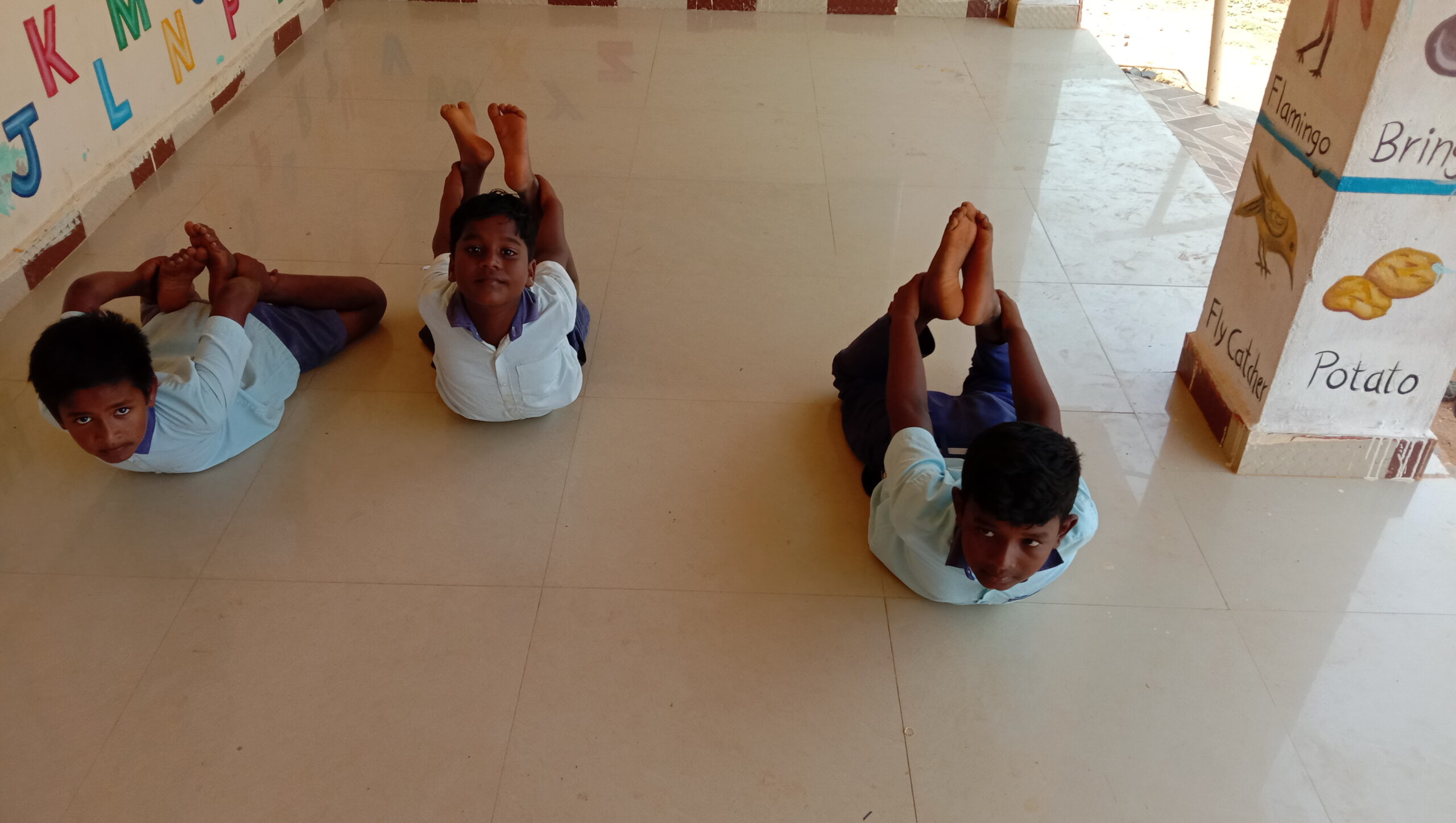 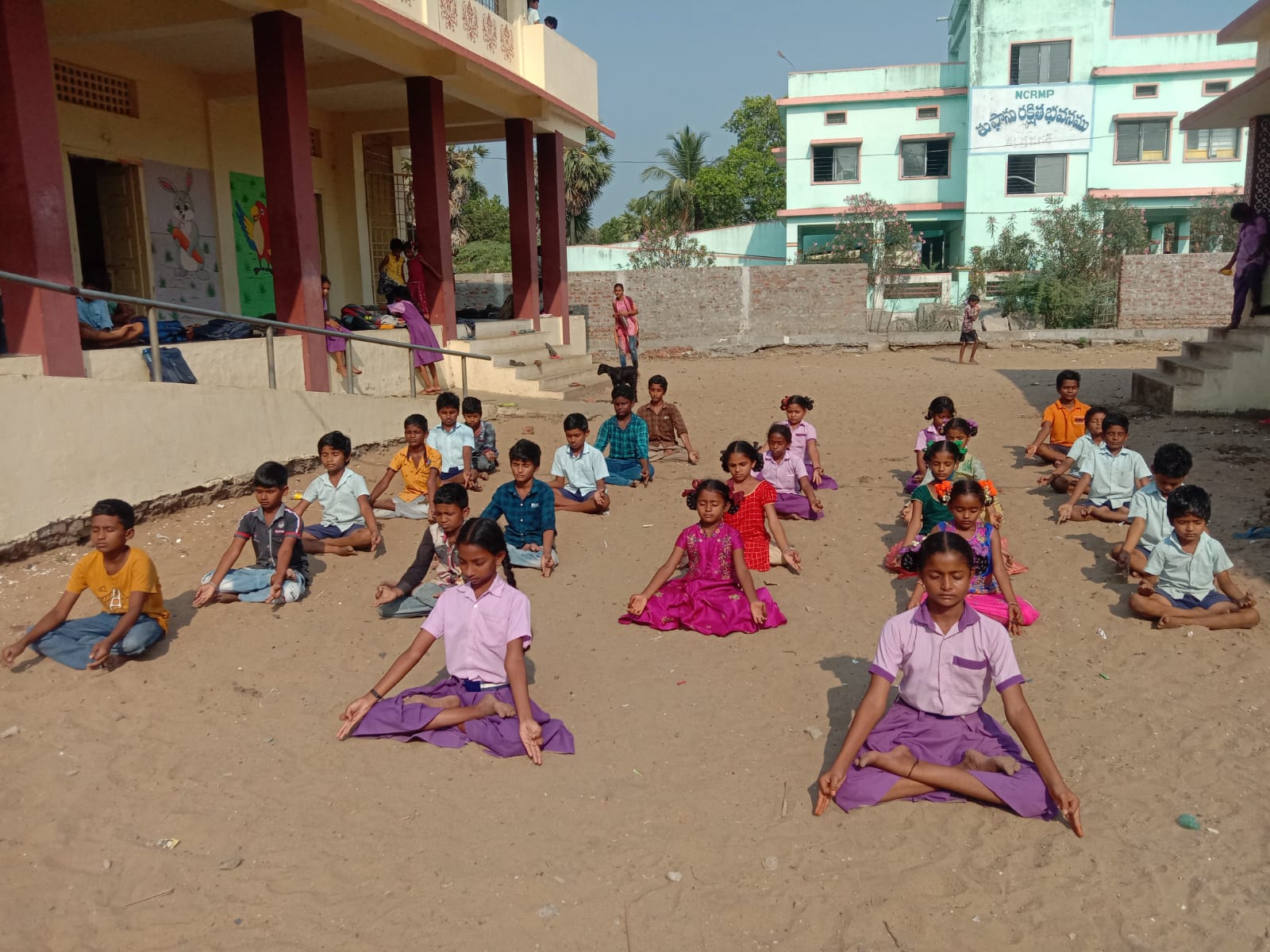 Dance is also a regular activity practiced by students in all our adopted schools. Our dance masters visit the schools daily and make students practice dance daily in the afternoon sessions. Basically, most of the students were fond of dancing. If they have a separate dance master, they are putting their complete interest and efforts into learning it. Dance is not only the movement of hands and legs, it also includes expressions that need to be carried throughout their act. Some performances include a property like umbrella; chair and etc.The use of these properties will be of less time or else throughout the act. Students are trained in such a way that they are able to manage the movements, usage of property and expressions. This also develops a nature of handling multiple works at the same time. Volunteers put in more effort to teach them perfectly for a good outcome. 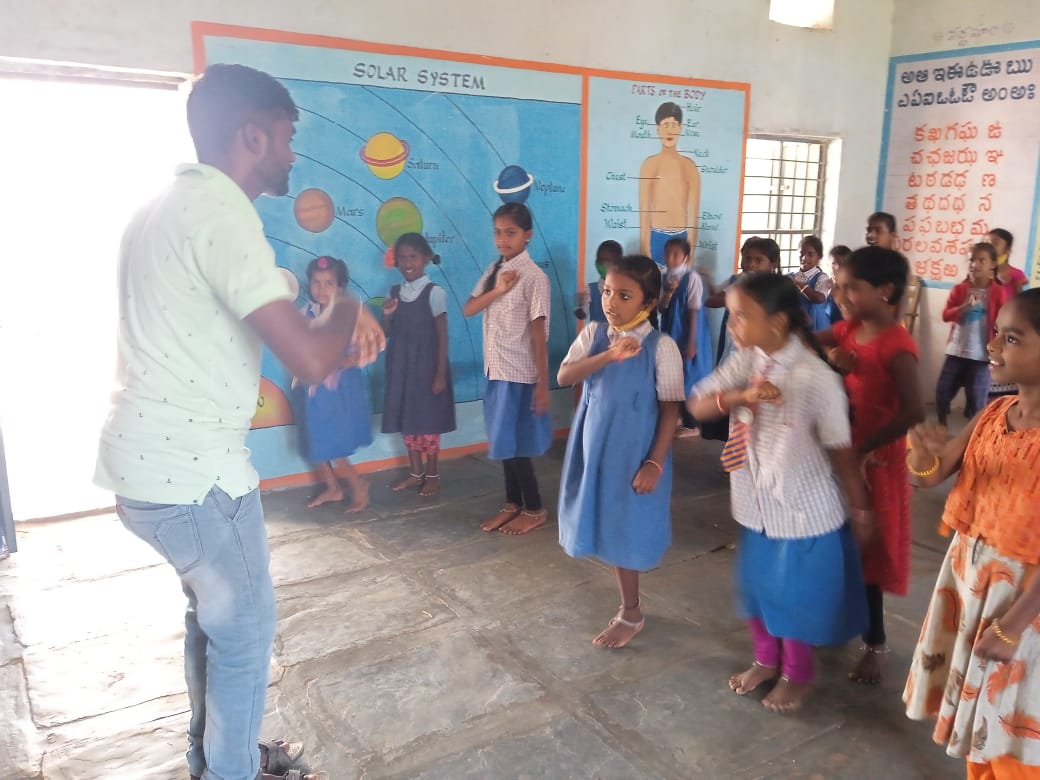 This is a new activity which has been introduced in all our adopted schools from the past few weeks. Basically this activity is an acrobatic formation which involves two or more people, where the stronger people kneel down and be as a base and the other persons stand on them to give a particular shape. The number of persons will be decreasing from base to the top. To do this perfectly, one should be physically more flexible. For physical flexibility, students were practicing yoga and flexibility exercises on a daily basis. Here one activity is linked with another one. Yoga is helping students to do pyramid formations. In all the adopted schools, pyramid formation was taught more than thrice in a week on a regular basis. Firstly, PET sir teaches about these formations on board depicting different formations. Later students move to practice, when an activity is taught theoretically, half of the knowledge about it is gained later is left with practice. Initially, students were having little fear to stand on one another, but day by day they were trying to develop good coordination and cracking it. As students are small, volunteers help them when students face difficulty in doing and guide them to do better during their practice. We are very happy that students were able to adapt to new activities and practice them with good interest and perform them. In the recently celebrated Annual day program, students performed this and received huge applause. Students were not only learning the activity, they were also learning unity, trust etc. 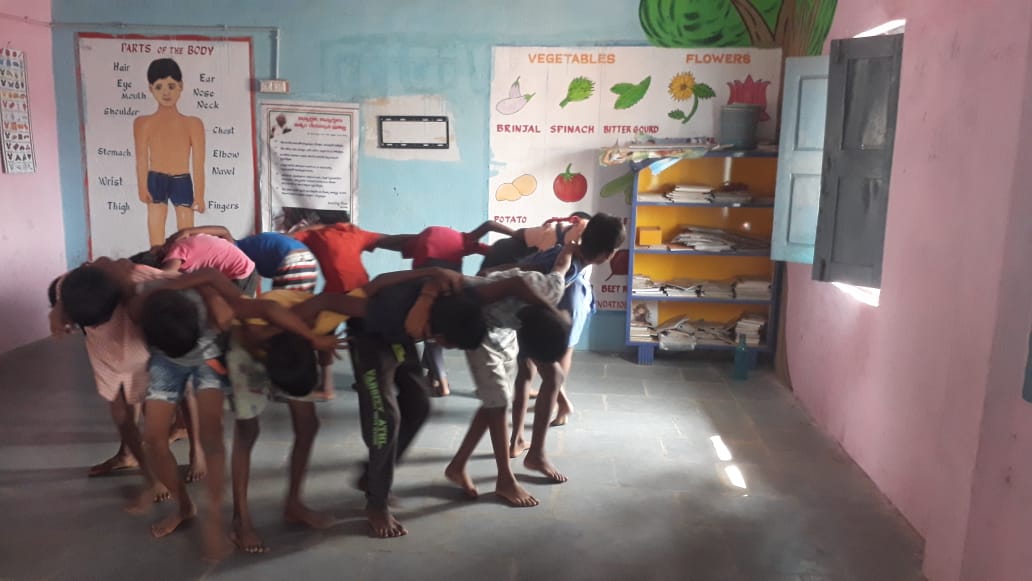 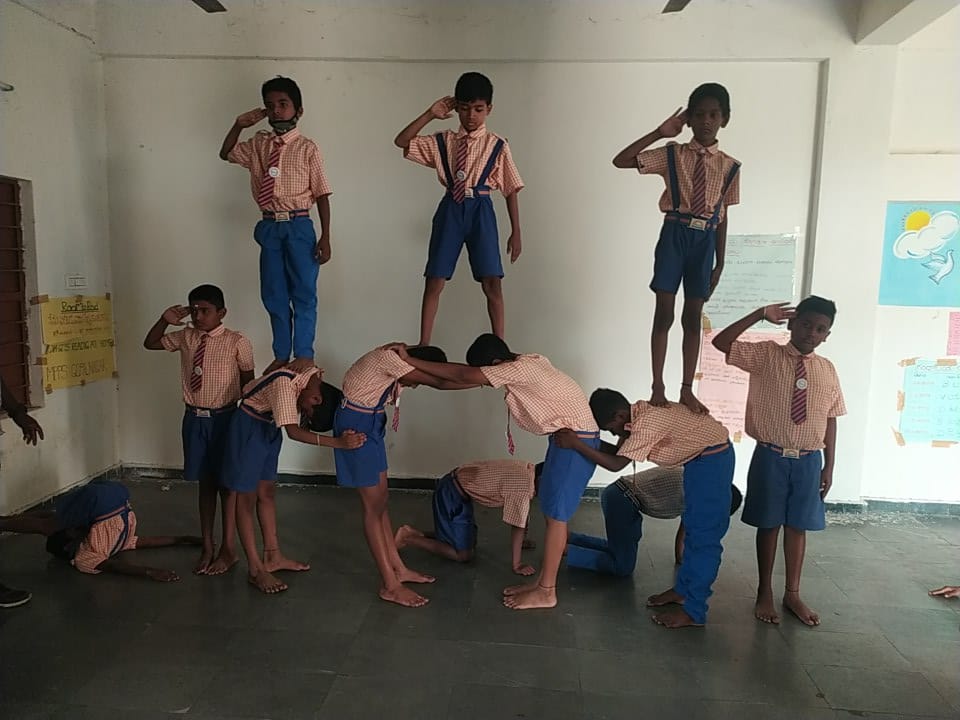 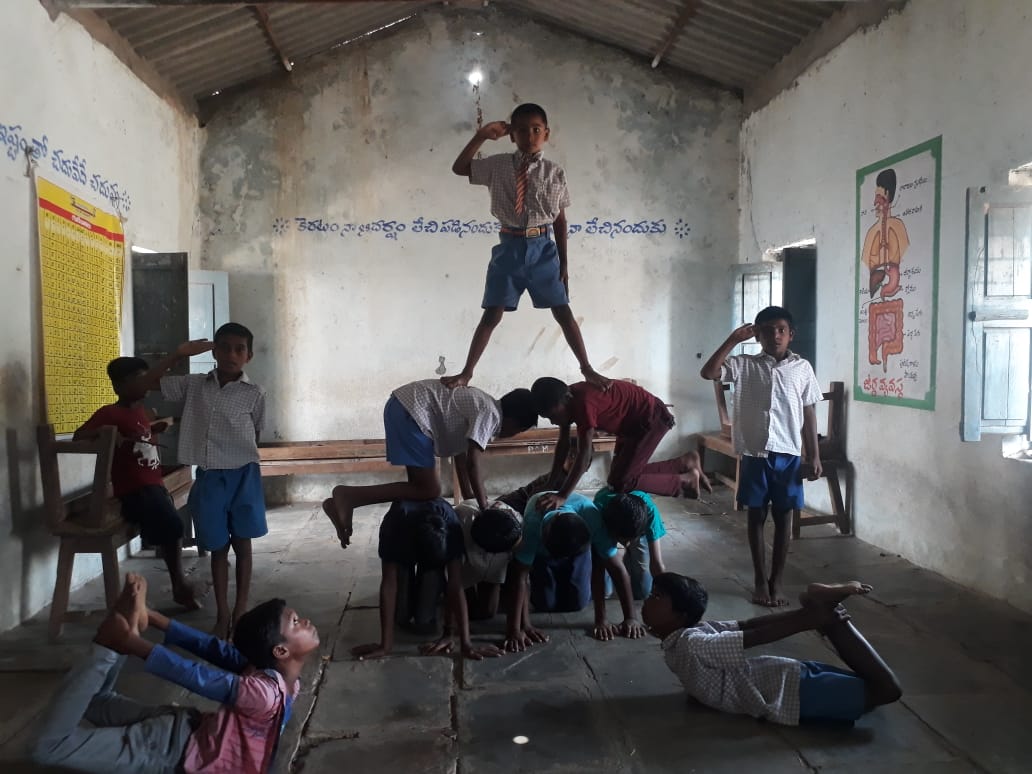 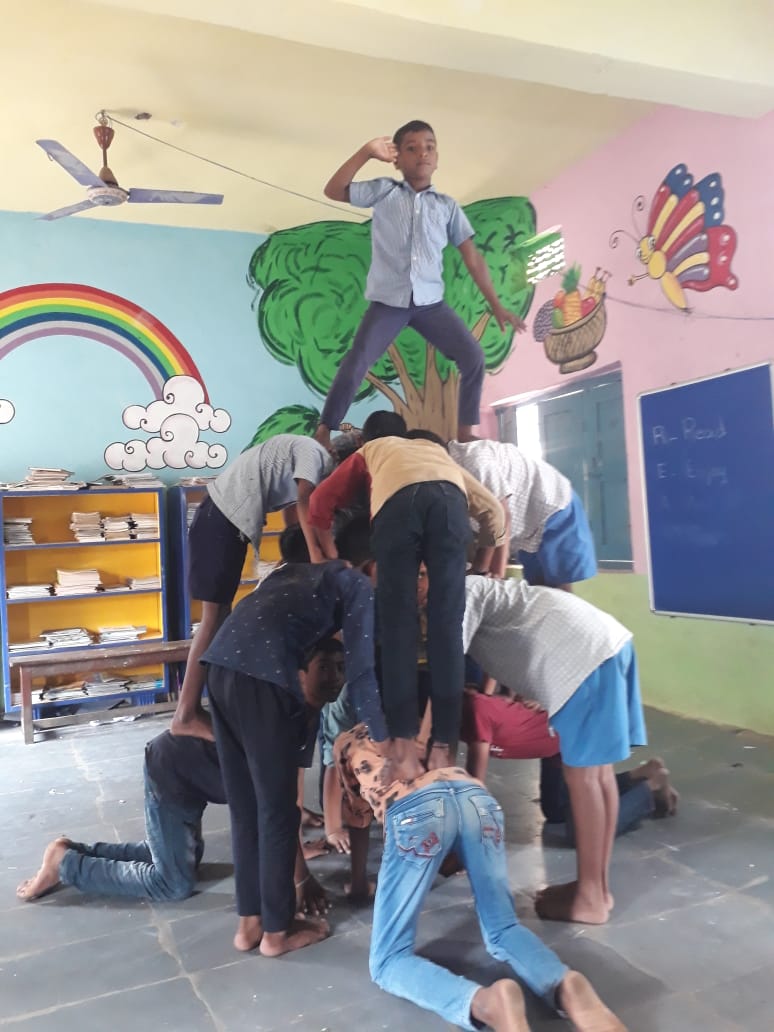 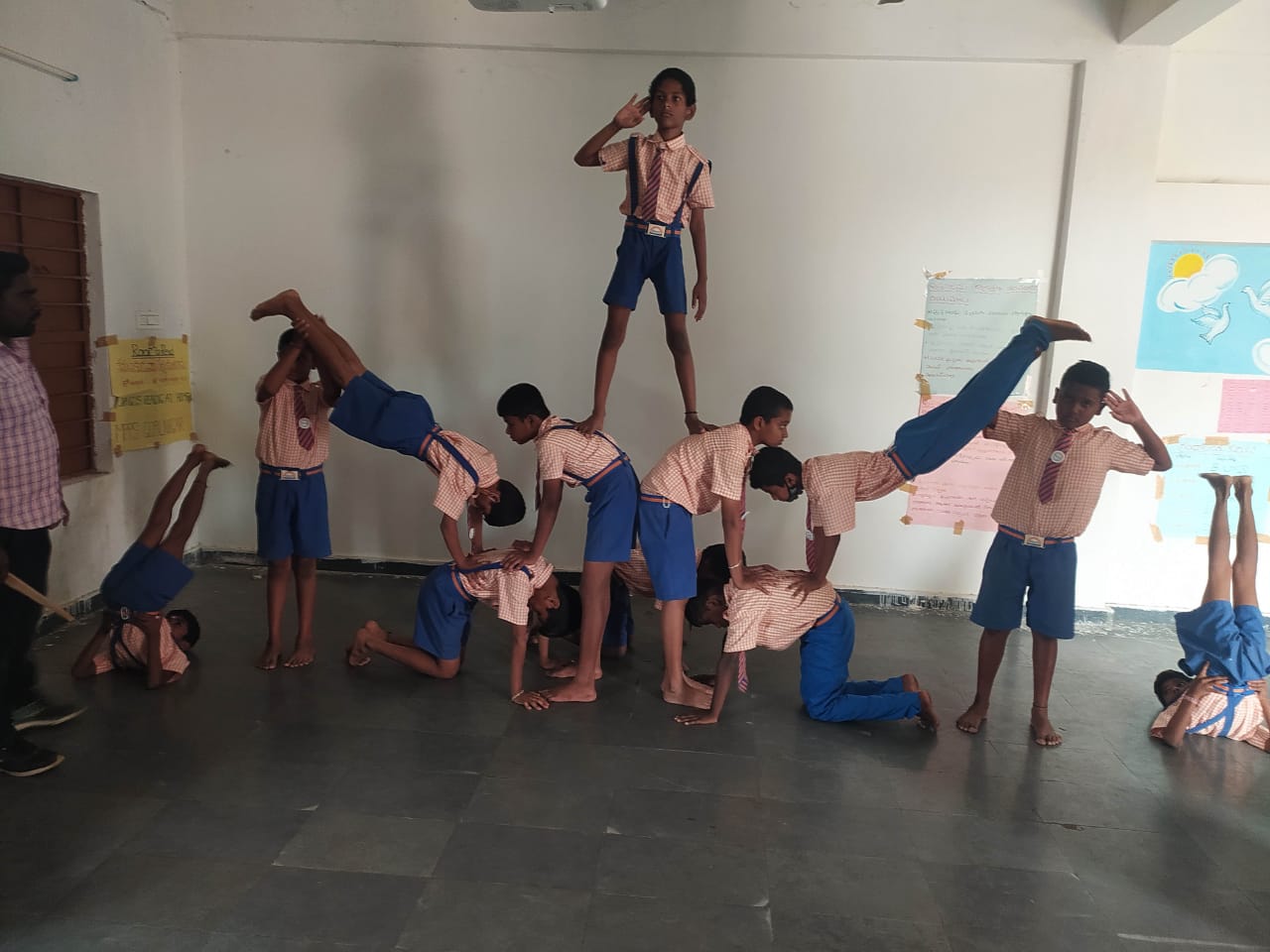